I know, I know. They’re buried under a mountain of guac. Sorry not sorry, you gotta do what you gotta do…

Please excuse the excessive letters and capitals. I’m not shouting, promise. I’m just reeeeeally excited that I made something resembling a fajita in my own oven. Because I a) love fajitas, if you couldn’t tell and b) thought they might be too difficult or some other lazy excuse. But, I proved myself wrong.

And in return, I got tacos. Mmmmm. With homemade guac falling out all over the place because I always break rule number one and overstuff my fajita or taco tortillas. Whatever, when your taco runneth over, life is good. I seem to have this problem with quesadillas too, their innards are always falling all over the place because I insist on shoving half the vegetable drawer into them, along with obligatory beans. You think I’m exaggerating… but actually not. I have witnesses, they can vouch for me.

Also yes. I do put chia seeds on my fajita-tacos. Because, crunchy. 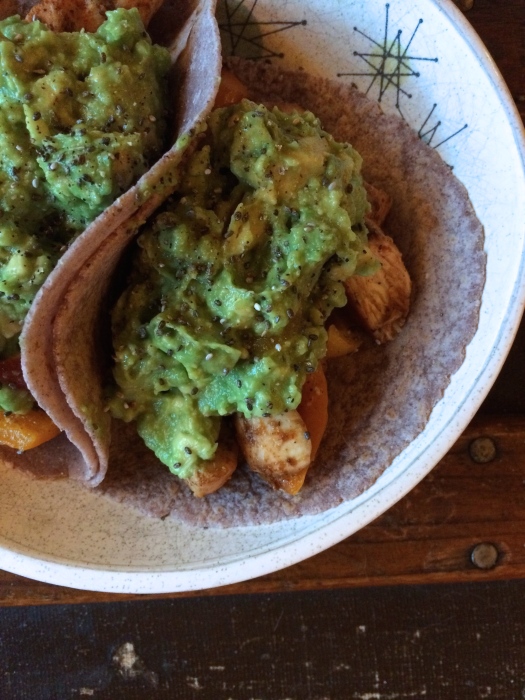 Yesterday was another day of food prep, though I definitely didn’t cook as much as last week. Split pea soup (with bacon. natch) is chillin in the fridge for dinner tonight (side note, the slow cooker is fab for these kinds of recipes), and I also did some chickpea-cashew butter- oat bars for dessert, which are pretty fab, and coming to the blog soonish, whenever I can find time and can write some chuckle-inducing thing to accompany them… 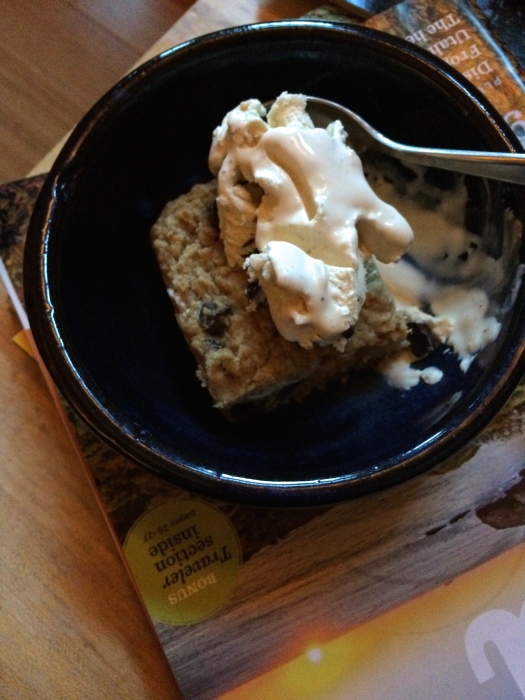 More of this trashed-up dessert coming soon {watch this space for further developments…}.. I was channeling some Jackson Pollack ice cream styling in the above photo. Try it sometime, playing with your food is fab.

This is about as easy as it gets. Chop chop chop toss toss pour spread clank (that was putting them in the oven, ha) tick tick tick ding! boom done. Just like that, though you’ll have to provide your own sound effects…
Though I made these for a food prep day, they would actually be easy for a weeknight meal. The prep work doesn’t take long at all, especially if the chicken is already defrosted, and they finish cooking in about a half an hour, giving you plenty of time to mash up homemade guac.

Gluten free with corn tortillas (which is what I use). Serve with homemade guac (so-called ‘recipe’ below) for a good dose of healthy fats! Recipe serves 3 generously, with leftovers for one. Only slightly adapted from Whole Foods, here.

Preheat the oven to 400, and procure a large rimmed sheet pan.

In a large bowl, toss together chicken, peppers, onion, garlic, avocado oil, chili powder, and sea salt, making sure the oil and spices are decently distributed. Spread all this out onto the sheet pan, and bake for 25 – 30 minutes, until the chicken is cooked through and the vegetables are tender. I like to toast my tortillas over the gas burners on the stove, but you can also wrap them in foil, and heat them in the oven during the last five minutes of cooking.

Serve with tortillas, guac, and anything else your taco-loving heart desires.

I mildly feel like I’m insulting your intelligence by calling this a recipe, so let’s just lay out the basics:

No one in my fam is a big fan of raw onions, but I do like them occasionally in guac — let red onions marinate in the lime juice prior to making the guac, which takes away a bit of their bite. I didn’t use them here, but go ahead if that’s your thing!

In a bowl, mash together avocados and lime juice. I like to leave my guac chunky, but you do you. Stir in garlic powder and sea salt to taste, followed by the tomatoes. Store in a covered container in the fridge to prevent browning, and eat on EVERYTHING. This amount serves 3, plus leftovers for one (or at least that’s what happened in my family…). 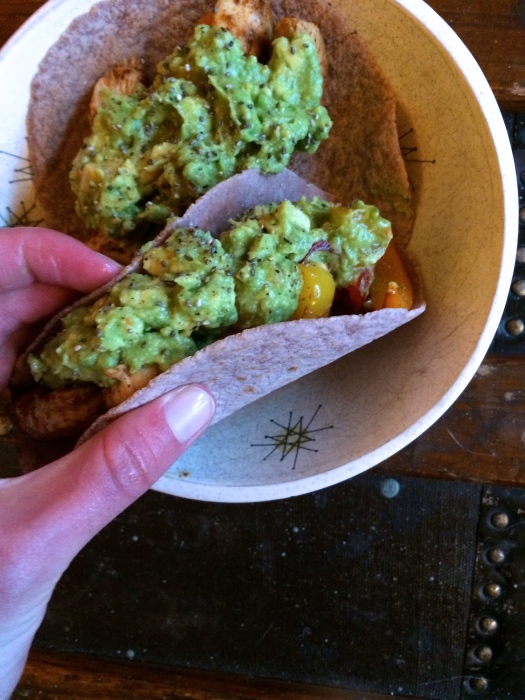