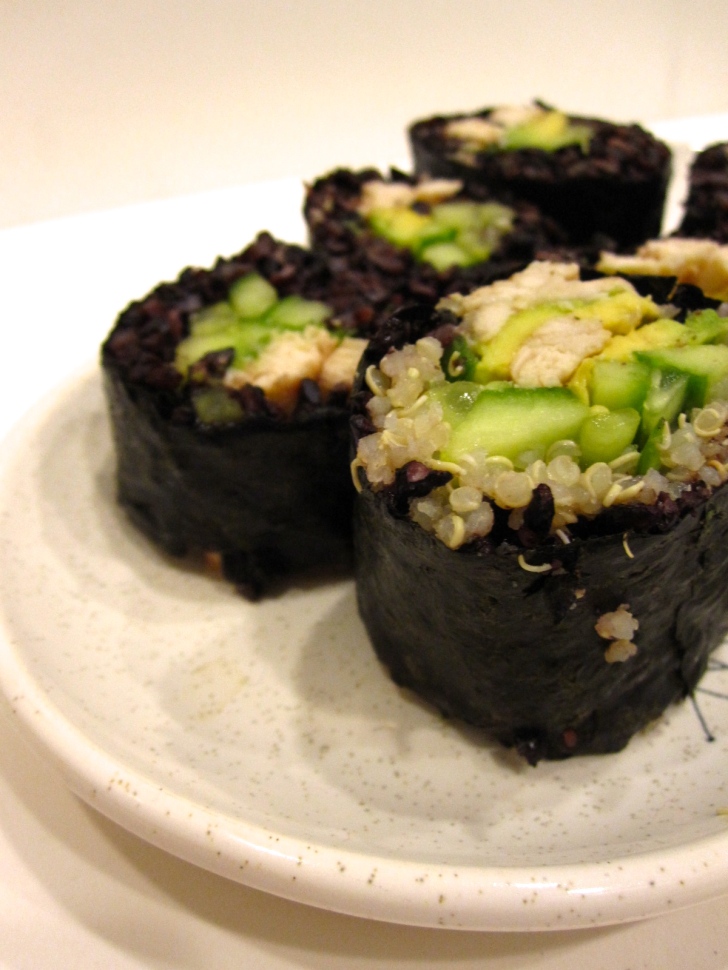 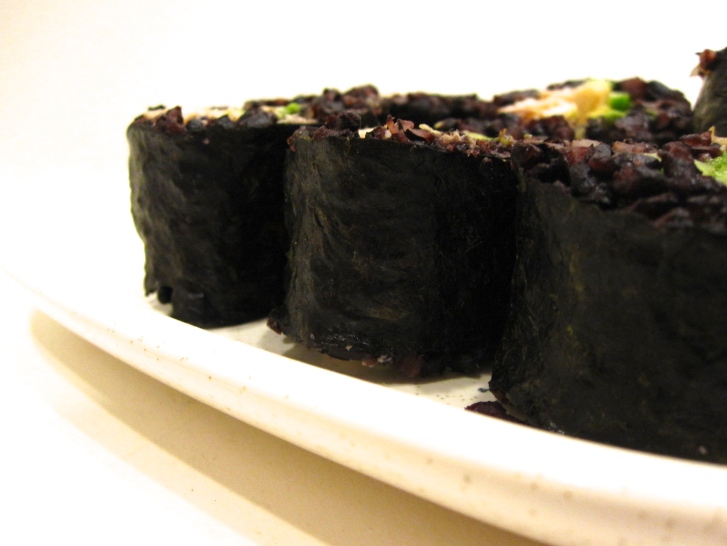 You have no idea how excited I am about this. Well, maybe you do, given the excessive use of capitals and exclamation points, but really. I feel like a proud parent of my little sushi children. What’s more, I didn’t use a tutorial (ain’t nobody got time for that) but just used the instructions on the back of t the nori wrapper. Like. A. Boss.

I know you’re not supposed to say your own food is amazing but I’m going to flagrantly break this rule as a) they were freaking delicious and b) I wasn’t the only one eating them and thinking they were delicious and c) my birthday is tomorrow so I can do what I want! Ha.

I’ve always loved sushi anyway—my parents started me early, and I was always asking to go to this sushi bar that had revolving boats in front of you with fresh sushi. Totally dangerous, because you end up going from ‘dang I’m hungry’ to ‘does a wheelbarrow come with this??’ in about thirty seconds. At least my dad introduced me early to raw fish and these little crabby things that he told me were like potato chips. So I ate them. Such trickery. And I always thought the orange fish roe was interesting looking, so I probably ate that too just because I liked the glowing orange globs. Such a visual child… 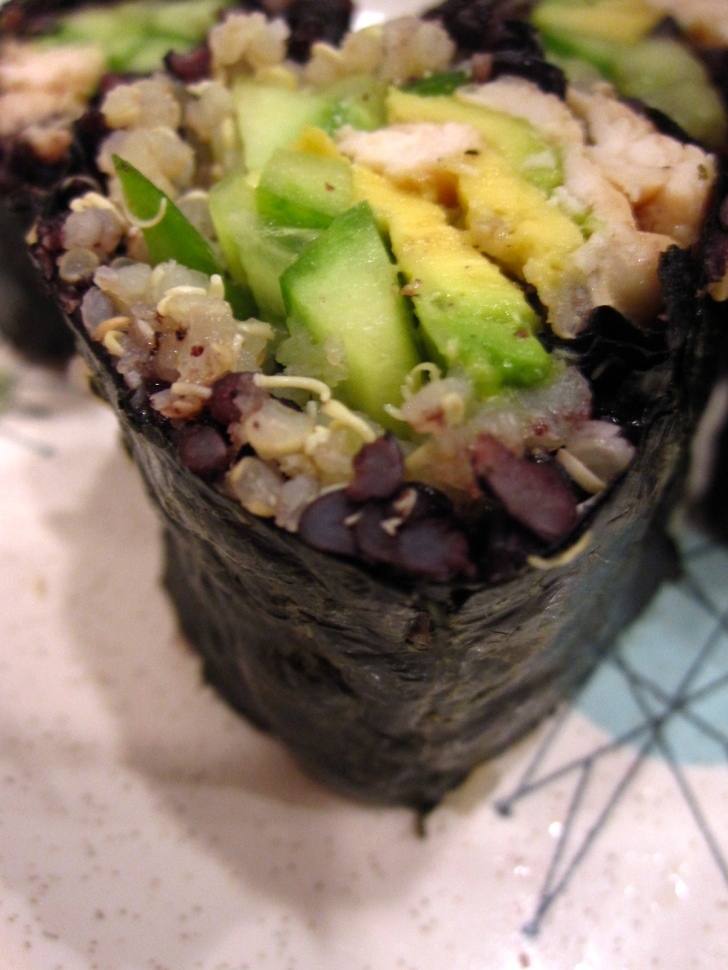 I do love raw fish but I wasn’t about to expend that much energy or resources to source some (especially on a Friday, noooo thank you I’m tired and lazy) so these are chicken rolls! Not terribly traditional, but I really don’t care–they were awesome and they look like authentic sushi rolls so who’s judging? Besides, the chicken is marinated in rice wine vinegar and coconut aminos, so really—what more could you ask for?! But seriously. These are startlingly easy, they just require some prep time. Make them!! Be a proud parent of your sushi roll-lets. They’re adorable, and delicious. And your cats might be interested in them too…

Makes approximately 6 rolls—I had a nori packet with 7 sheets but I was only feeding three, so I made 6 and we ate the leftover nori sheet plain. I had a bit of leftover quinoa and made a roll that was combined rice/quinoa—also delicious!

Sometime earlier in the day (so that your rice has time to cool), make yo’ rice! Bring 2 c of water to a boil in a medium saucepan, then add rice and stir once or twice before covering and reducing to a simmer. Simmer for about 30 minutes, until the rice is still a little chewy and the water has been absorbed. Once rice is done, season it with a bit of salt and about 3ish tsp of rice wine vinegar. Let sit until fully cooled. 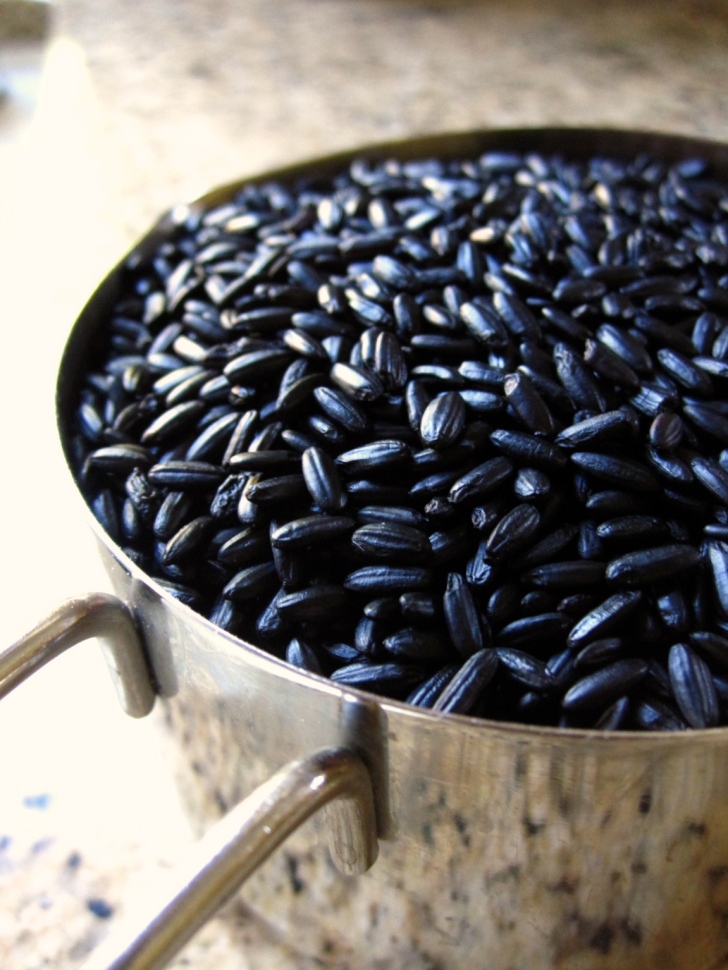 Combine coconut aminos, rice wine vinegar, and a bit of water in a bowl (I approximate the measurements, so taste before you toss in the chicken). Prep chicken by cutting it into thin strips, and let marinate while the pan is heating. Heat coconut oil in a skillet over medium heat—when hot, toss in chicken and cook until chicken is fully cooked, with none of that pink business going on. Let it cool a bit while you prep the other roll ingredients.

Slice avocado and cucumber into thin strips. Place a piece of nori (rough side up) on your sushi mat. Spread rice evenly across the lower 3/4 of the nori, leaving the edge farthest from you rice-free. Lay strips of cucumber, avocado, and chicken across the middle of the rice, and begin rolling from the side closest to you. I found it easiest to guide the roll by rolling the mat back on itself as I began to compress the roll. Wet the far end of the nori with a bit of water so that the roll will stick together once it’s completed. Use the mat to tighten the roll, then let it rest on it’s seam for a minute before cutting. Use a very sharp, serrated knife to cut the rolls, wetting it each time you cut a new roll.

Obviously there are lots of ways to customize this—I made some veggie rolls and some with chicken, but the chicken ended up being my fave! Roll to your heart’s content, then slice and serve. I ate mine with a bit of Bragg’s liquid aminos for dipping. These best the day they’re made, but would probably keep fairly well in the fridge for a day or so. 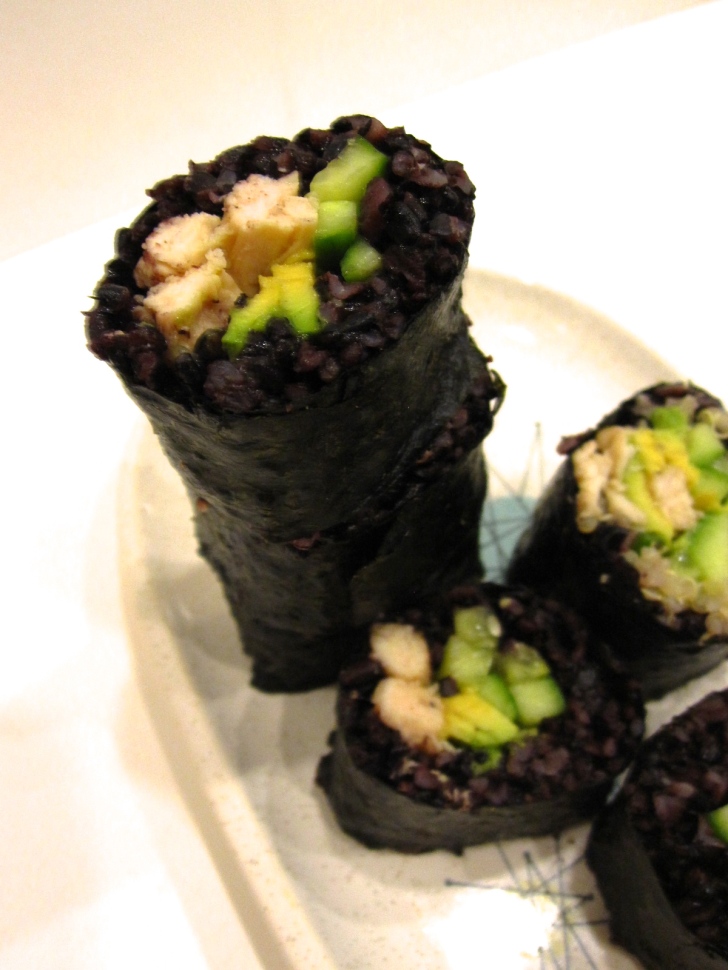