Happy Pride! It is hard to believe we are this far into June – I’m excited, since the stone fruit season is starting to really get going, and berries are lovely right now.

This week was eventful – I gave myself a black eye with a 900 page paperback (sci-fi of course) when I accidentally (duh) dropped it on my face… such a raging Friday night! I wasn’t even asleep, it just slipped out of my hand & got me. Rude! Sometimes I impress even myself. Photo evidence, just in case you needed proof: 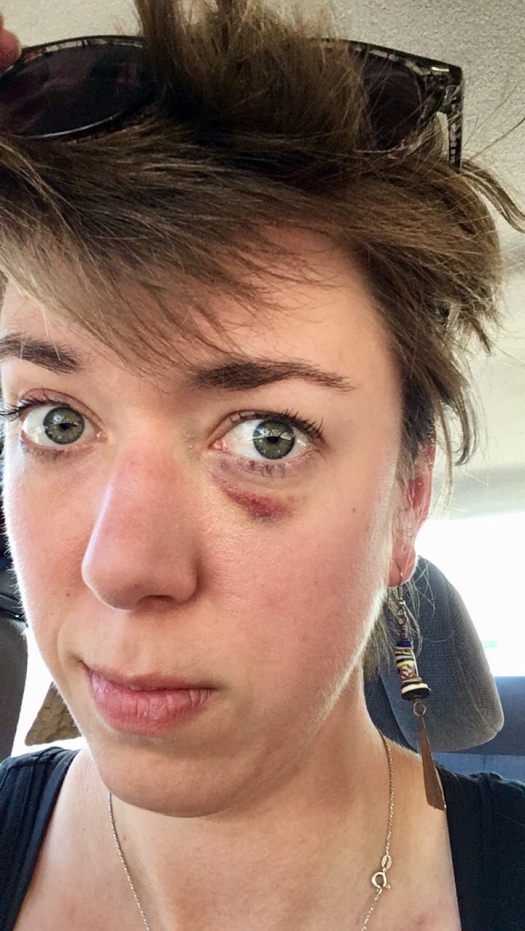 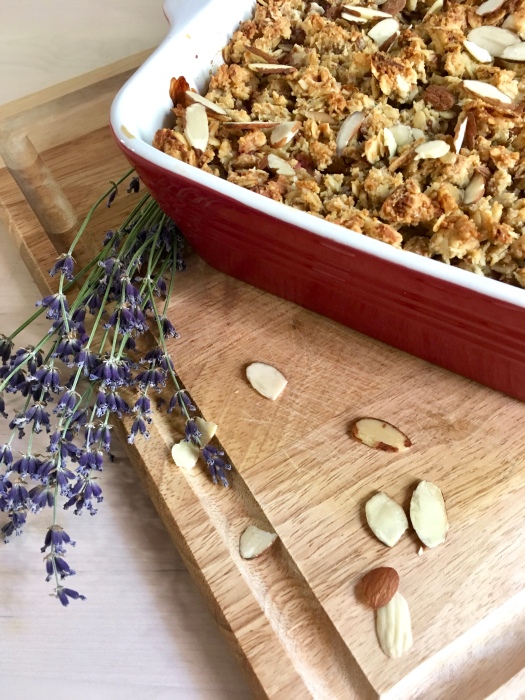 Anyway, enough of my raging & back to the fruit at hand: I also love rhubarb – though I typically think of it more as a late spring thing than summer. This will probably be the last rhubarb thing on here – it gets harder to find, and I really want to play with all the stone fruit anyway!

The California summer is definitely in full swing: the hills have gone that golden shade that is so pretty against the dark oaks and blue sky. I could do without the hot weather but… at least I have access to a very cold pool! You will find me there more than frequently ;)

This crisp is for those who LOVE rhubarb – it’s very rhubarb-forward! We both love the tart awesomeness of it, but I know it’s not everyone’s jam. Lavender was an interesting addition – I don’t use it all that frequently in baking (I find it can get a little… soapy, sometimes) but it adds a nice floral note here, which pairs especially nicely with ice cream…

Of course, it’s us – this got eaten for dessert and then alongside the usual breakfast. No regrets! We were both starving anyway after having woken ourselves up by walking up some hills on a nice little shorty hike. 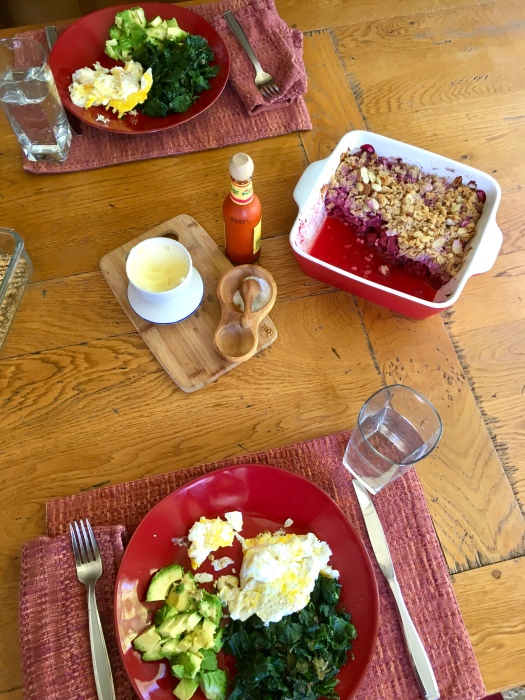 I hope everyone out there in my corner of the internet is enjoying their weekends! Happy baking, if indeed you do some :)

For those who LOVE rhubarb! This one is right in your face. Lightly sweet but seriously tart; lightly floral from the lavender and perfect with ice cream for a summer dessert or on it’s own for breakfast. A Wait are Those Cookies original! Yield: 1 crisp – I use an 8 by 8 dish that holds two quarts; you can also use a 9″ deep pie dish. Just make sure there is ample room for fruit! Serves: 2, or several… you decide!

*I just approximate; I use however many it takes to fill my 2 quart, 8×8 baking dish
*I baked straight from frozen; fresh would also be fine

Preheat the oven to 350.
Toss chopped rhubarb, raspberries and lavender into your baking dish of choice (my dish is 8×8, 2 qt capacity; 9″ square or 9″ deep pie dish would also be fine). In a liquid measuring cup, whisk together the maple and water/port until combined. Add the arrowroot, and whisk to combine. Pour the mixture over the fruit and toss to combine. Bake for 20 minutes.

While the filling is baking, make the crisp. In a mixing bowl, stir together the oats, almond meal, chopped almonds, shredded coconut, maple sugar and salt. Mix in the vanilla, melted butter and the yogurt. Stir until everything is mixed thoroughly.

Once the filling has baked for 20 minutes, stir it and and redistribute evenly in the dish. Plop spoonfuls of the crisp topping evenly over the filling – no need to pack it down. Return the dish to the oven and bake for 25 to 30 more minutes, until the filling is bubbling around the edges and the top is golden.
Let the crisp rest for 5 to 10 minutes before serving. Serve with vanilla ice cream, obviously! Keep leftovers, covered, in the fridge for about five days (yeah right. It would take some kind of major feat to make it last that long)

I’m feeling less than creatively humorous today…It must be on account of all of the holiday sweets I’ve been consuming lately. Oops. Whatever, that’s not stopped me from baking like a crazy! Really, does anything ever stop me? … Correct answer: No.

Bring on the healthy (ish) dessert! I win, I win!! Delicious AND nutritious (or hey, I can at least tell myself that, right?!). I sort of needed a break from all of the layer cakes. A short break, mind you, but a break none the less. In comes the tart! This tart is sort of a combination of a rice pudding and a tart crust, but it’s vegan! Which is awesome, as I’d like to get into more vegan baking (I find it intriguing). Besides, I LOVE rice pudding, and this definitely qualifies. It’s also really akin to a sticky rice dessert, which I ALSO LOVE (are we seeing a trend here?!), which therefore also makes it delicious.

On the nutritious side, it has a mostly minimal amount of fat in it—coconut oil is good for you, anyway! It also is made with black rice (sometimes known as Forbidden Rice, as only the emperor of China was allowed to eat it for the benefit of his longevity), which has more of the antioxidant antohcyanin than blueberries! It’s high in fiber, iron, and an excellent source of minerals. AND Kind of can’t go wrong, when I’m eating antioxidants for dessert! No wonder the emperor was so protective of his rice. But the common people have it now, so ha! Besides all that, it is a gorgeous purple color. Which makes my eyes AND my stomach happy. Everyone wins. Including the gremlins that hang out in my stomach, as we know they loooove color.

But wait. There is even more nutritionalness to be found in this dessert! The crust is made with whole grains and cashews (which contain the same oleic acid–monounsaturated fatty acid found in olive oil), and coconut oil, which is insanely good for you (the lauric acid is an antioxidant, among a million other things).

Okaaayyy. Enough with the nutrition lesson. I just really had to convince you how good this is for you… so that you’ll go home and make it. It’s fab, you won’t regret it. And then eat a slice. Or two. Or five. And revel in the fact that you’re making your body happy! It will thank you later :)

From NeverHomeMaker, original here! (and their blog is fab, check it out!). Makes one tart.

For the sticky rice

Preheat the oven to 325, and lightly grease a tart pan (or a pie dish—my tart pan is in Salem, so that’s what I used).

In a food processor, process the cashews and 1/4 c rolled oats until finely ground. Add the rest of the oats, lavender and salt, pulsing to combine. I left some slightly larger chunks. Pour into a medium sized bowl and set aside. In a small saucepan over low heat, melt the coconut oil. Once melted, stir in vanilla and brown sugar, and simmer over a low flame for 2 to 3 minutes. Mine looked weirdly separated/congealed, but turned out fine. Pour the hot syrup over the dry ingredients, and combine thoroughly. Press the crust into your pan of choice, making sure to cover the bottom and go up the sides a ways. Bake for 5 minutes, then let cool. When cool enough, let it set in the refrigerator.

While the crust is cooling, start the water for the rice. When it boils, add rice, cover, and simmer for about 30 minutes, until all the water is absorbed. Add coconut milk, maple syrup, and coconut flakes, and continue to cook until the liquid is absorbed, about 20 minutes more. I stirred continuously (it makes for meditative thinking time, hehe), but I’m not entirely sure this is necessary—occasional stirring would likely be okay. Transfer the pudding to a bowl, and let cool. Chill briefly in the fridge before using. Once chilled, pour the pudding into the tart shell, and chill until serving. I topped mine with more shredded coconut.

It was deeeelicous! Mine had a little trouble coming out of the dish cleanly—my crust was rather sticky. Next time… more coconut oil to grease the dish. It was a bit more like a crumble than a tart slice, but ridiculously tasty nonetheless, so I wasn’t complaining ;)