The extra hour this weekend was pretty swell though, I must say. Fave human and I got in a great 6 mile hike this morning before we ate – crisp makes a great post-hike addition to eggs!

A few photos of life lately – we took a sunset sail this weekend too, which was awesome. The sky was just spectacular; there is no filter on these photos! 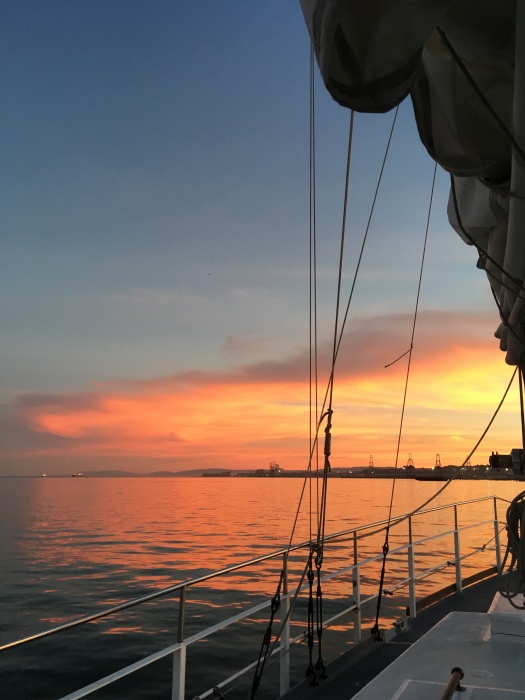 As usual, I was my weird self… not sure what’s going on here but it just looks typical… was I summoning the water?! 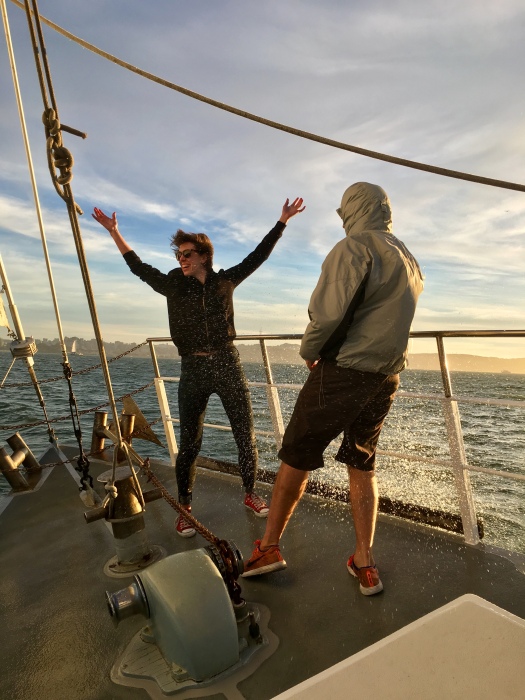 This is the reigning favorite crisp recipe around here – it keeps its structural integrity overnight even when sitting on super juicy fruit, which is a must. It’s chunky in the best way, like a good granola – and it’s perfect for breakfast! Fruit, nuts, oats, yogurt and butter – what more do you need? 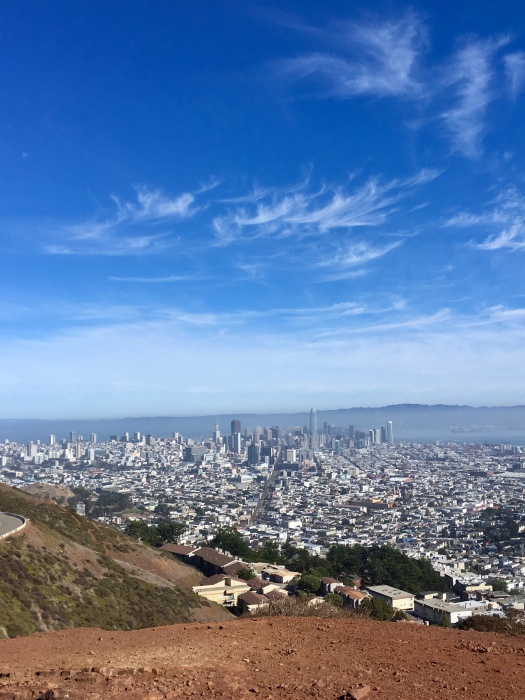 I had frozen some late season peaches awhile back and wanted to use them before they sat too long in the freezer. It goes against my love of seasonal baking, but waste not, want not! Turns out pomegranate and peach go quite well together anyway, and the rosemary keeps it from feeling too overly summer-y of a dessert. It comes together in a snap too, so what’s not to love.

I love love love adding rosemary to desserts. It brings just the right amount of savory to whatever dessert it is – and we know I like things on the very much less sweet side. C and I both loved this one – it was disappearing with mildly alarming rapidity, so we’ll see if it makes it though the end of the weekend, ha!

An extremely easily adaptable crisp – use whatever fruit needs to be consumed! I had frozen some late season peaches and wanted to use them before they sat too long – they went excellently with blackberries and pomegranate seeds. This minimally sweet crisp is basically breakfast – fruit, nuts, oats and yogurt! Nearly all of its sweetness comes from the fruit, so make sure whatever you’re using is perfectly ripe. Yet another riff on the crisp I’ve made a million zillion times, here. Yield: 1 8×8, 2qt crisp, serves several.

*I just approximate; I use however many it takes to fill my 2 quart, 8×8 baking dish
*I baked straight from frozen; fresh would also be fine

Preheat the oven to 350.
Toss peaches, blackberries, and pomegranate seeds into your baking dish of choice (my dish is 8×8, 2 qt capacity; 9″ square or 9″ deep pie dish would also be fine). In a liquid measuring cup, whisk together the maple, water/port, lemon juice and lemon zest until combined. Add the arrowroot, and whisk to combine. Pour the mixture over the fruit and toss to combine. Bake for 20 minutes.

While the filling is baking, make the crisp. In a mixing bowl, stir together the oats, almond meal, chopped walnuts, shredded coconut, coconut sugar, salt, and rosemary. Mix in the vanilla, melted butter and the yogurt. Stir until everything is mixed thoroughly.

Once the filling has baked for 20 minutes, stir it and and redistribute evenly in the dish. Plop spoonfuls of the crisp topping evenly over the filling – no need to pack it down. Return the dish to the oven and bake for 25 to 30 more minutes, until the filling is bubbling around the edges and the top is golden.
Let the crisp rest for 5 to 10 minutes before serving. Serve with vanilla ice cream, obviously! Keep leftovers, covered, in the fridge for about five days (yeah right. It would take some kind of major feat to make it last that long)