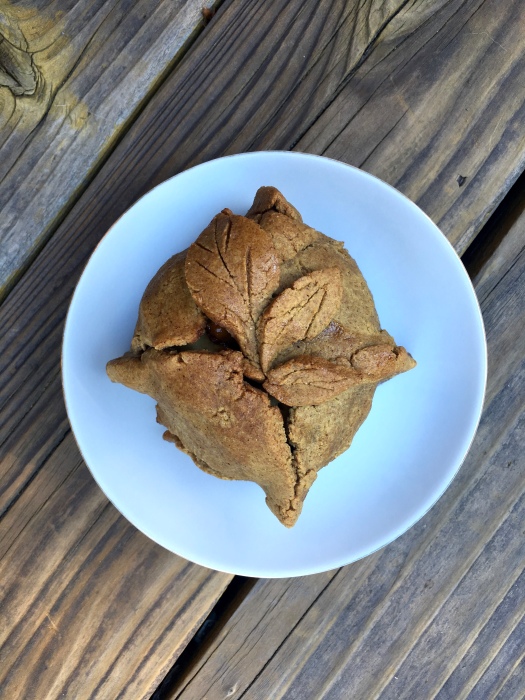 I have apple-y, fall-y dessert for you today! And can someone explain to me how it’s almost November already? That snuck up on me… but whatever, I have baked apples (or at least I did, they’re all gone now, what a shocker) so it’s all good. 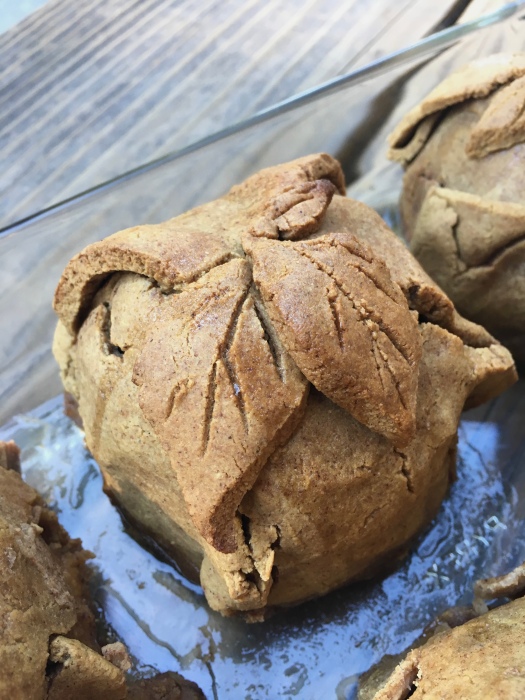 Despite looking and sounding kind of complicated, these apples actually aren’t so bad, they just require some advance planning. But there’s no prolonged dough chilling involved, and the dumpling dough is very forgiving (all good things in my book). 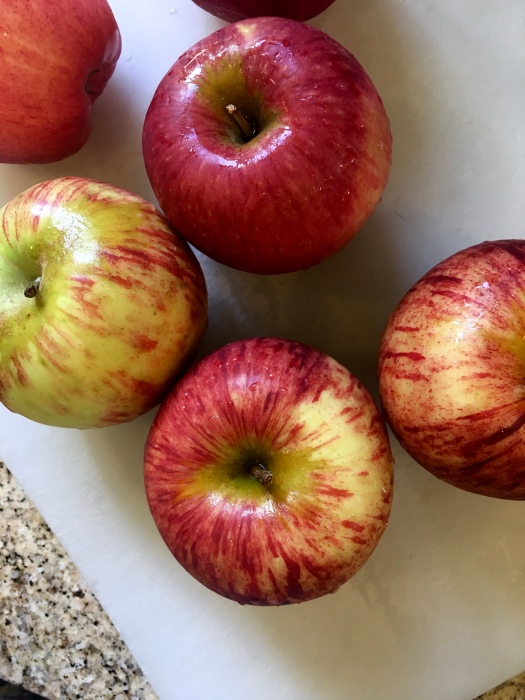 In other news, I’m sitting with my legs wrapped in a blanket because it’s cool this morning and when I just went to get up, I got all tangled up and almost ate it. But I didn’t! I’m basically a mermaid… 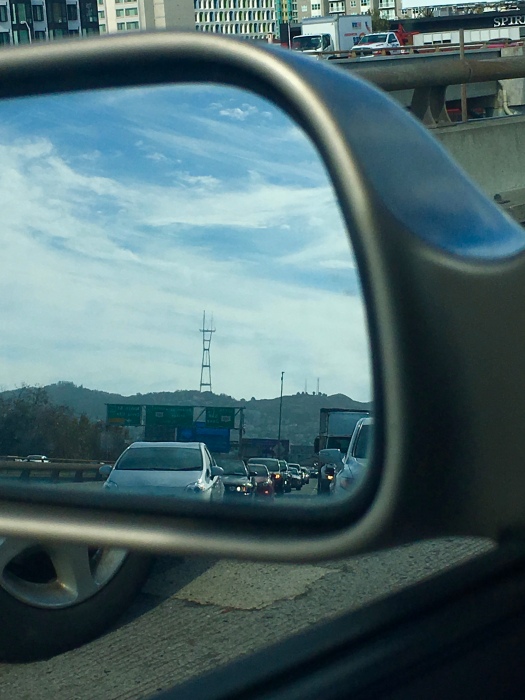 I don’t think desserts get more autumnal than this: apples stuffed with oats and walnuts, wrapped in pastry dough and baked in a caramel bath. Highly recommended both for dessert (with ice cream, obviously) and for breakfast, alongside eggs and something green. Happy Fall! 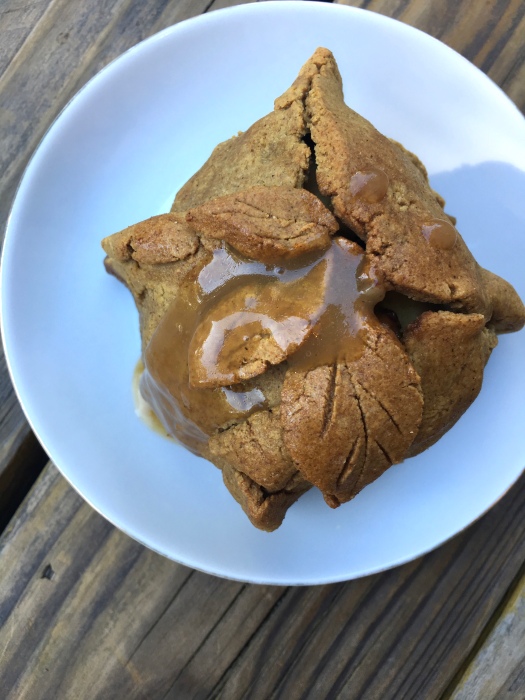 Gluten free, refined sugar free! Can be dairy free with a very easy swap (coconut oil for the butter in both the dough and the caramel); a delicious and quintessentially autumnal dessert. Despite looking tricky, these aren’t especially hard — they just take a little planning. Yield: 6 apple dumplings + sauce + walnuts; we found that 1/2 an apple was totally sufficient in one sitting but this could easily be 6 servings if that was all you were eating! Recipe adapted from The Kitchn, here!

*toasting reduces the natural bitterness of quinoa — I do mine in a skillet over medium heat, stirring frequently for about 3-5 minutes, until the flour is fragrant and the flour is just barely starting to go golden. Let cool before using.

For the caramel sauce:

These have a lot of parts, but they’re not very complicated when you break it down! I made the walnuts several days ahead, which I recommend.

Heat a saute pan over medium until warm. Add maple (it should fizz when it hits the pan), walnuts, vanilla, and sea salt. Stir to combine and let cook, stirring frequently, until the maple has caramelized and the liquid is gone. The walnuts will feel soft until they cool, which is fine. Line a baking sheet with parchment paper and spread them out to cool, breaking up any large chunks. Store in an airtight jar for several weeks (but, yeah right. Mine were gone in a day!)

To make the pastry: In a large bowl, stir together toasted quinoa flour, coconut sugar, baking soda, and sea salt. Cut in the butter using a pastry cutter or your fingertips, until the butter pieces resemble small peas. Add in maple, and vanilla. Add milk, 1/4 c at a time, stirring until the dough just comes together (I like using my hands for this, I find it easier than a spoon). Once most of the milk is added, the dough should form a largish shaggy ball. Turn it out onto a floured surface and roll it out to about 1/8″ thick. I found it easier to roll out two sections of dough separately, as my counters are slightly small. Cut a piece of parchment paper into a 6×6″ square, and use it to trace and cut 6 dough squares. Stack them on a plate with pieces of parchment paper in between, and let them chill in the fridge while you prep the apples for the filling.

Peel and core each apple. In a small bowl, mix together oats, cubed butter, cinnamon and a few glazed walnuts — this goodness should be chunky, which is fine since it’ll just be stuffed into the space where the apple core was.

Preheat the oven to 450, and lightly grease a 9×13 baking dish (or large cast iron skillet).

Retrieve the dough squares. Sprinkle a bit of cinnamon and coconut sugar on the bottom of each, put the apple in the center of the dough, stuff some of the filling in the cored space (I used a few walnuts per apple, and filled the rest with the oat/butter blend), and bring the corners of the dough up to meet over the top of the apple. Pinch the sides together to seal the seams. Repeat for all remaining apples, and if you’re an overachiever like me, make little leaves out of the excess dough for decoration.

Place the apples in the prepared baking dish or skillet, about 1″ apart. Bake for 20 minutes, until the crust begins to brown. While the crust is baking, make the caramel: in a small saucepan, melt butter / add almond milk, sea salt, and vanilla over medium, until it comes to a simmer. Stir in maple and arrowroot, and let simmer for a few more minutes until thickened. Remove from heat.

Lower the heat to 350, and bake the apples for 30-40 more minutes**, until the apple is soft when poked with a fork and the dough is browned (quinoa flour is a little delicate, so if your dough cracks after baking, don’t worry! It’s still delicious). Remove from the oven once done, and pour caramel sauce over hot apples, and in and around them in the pan. Let cool for a few before eating — top with sauce and walnuts and ice cream for serving!

These keep well overnight in the fridge, and are delicious for breakfast (as well as for dessert, obiovusly, I can vouch for both). Store in the original pan, loosely covered with foil.

**I have some beef with the original apple dumpling method, which is to pour the caramel over after the initial par baking, and then continue baking for about a half an hour. That’s what I did, but I ran into some soggy dough and had to resort to some interesting pan switching techniques to continue baking them and THEN add the sauce back. SO. I would recommend the above method, which is how I would make them, when I make them again. That being said, they are delicious either way so you really can’t go wrong.