Ridiculously cold weather calls for ridiculously tasty meals. Especially dinners, when you don’t have to go anywhere and you can just curl up and eat peacefully, whilst watching the the emperor get his groove thrown off with your roomie. The entirety of which the two of you could basically quote, between the two of you. But that’s another story entirely. So. Since I am not currently residing in some steamy Mesoamerican jungle, like SOME lucky llamas, I am currently experiencing Salem’s tribute to November, which seems to be freezing fog and coooold weather. Don’t get me wrong, I do love snappy, cold fall days. I do not love wearing  my north face in class because the room is cold… although, that’s probably preferable to going to sleep in a too-warm room… hmm. Anyway. Let’s move ahead! (“Umm.. what’s with the chimp and the bug?!”)

Like I said in the last post, Kira and I have had a run of immensely satisfying dinners. This one unfortunately didn’t yield any leftovers to daydream about… *sigh*. oh well, Kira and I might have had to fight over them (they were that good!). And simple! Not only is this recipe simple to prepare, it’s also economical. Which is excellent, as we’re on a college budget over here. It’s simple, but immensely satisfying. Oh. AND it’s healthy! Pshhh, would I make anything else?! (well. yes. I would. But this is not it!) Like crab, but waaaaay better. Salmon is incredibly good for you—omega-3 fatty acids, which are good for cholesterol (and pretty skin and hair!). Besides, canned salmon is BOMB. It’s like fresh… but cheaper! And just as nutritious. Hooray!! Served with a salad and some crusty bread, this is a meal that is light on the stomach, yet incredibly satisfying. As Kuzko would say… “BOOM BAM, BABY! Let’s get to the grub! I am one huuungry king of the world!”

And no, this dish does not involve essence of llama in any form, thank goodness. My shoulder angels would be against that, I’m sure. 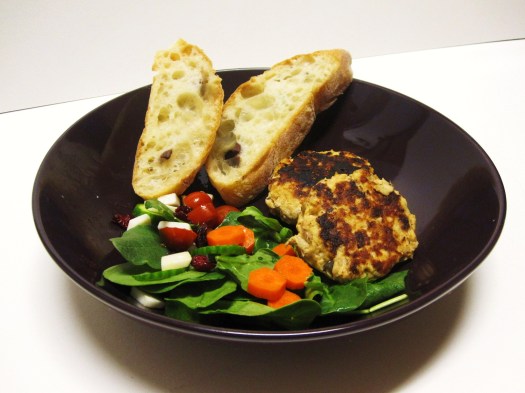 Adapted from Self magazine (I think that’s where I got it!) Serves two. We were hungry.

Heat a bit of olive oil in a skillet (or two, if you’re hungry and want to get this show on the road). While the oil is heating, combine:

Stir to combine all of this together, and then form into patties. We got about 6, probably about 1/4 cup salmon each. Plop into the hot skillet, and saute for about 5 to 6 minutes on each side, until browned and cooked though. Serve hot, with a side salad and some insanely good Moroccan olive crusty bread. Our salad tonight consisted of spinach, cucumbers, cherry tomatoes, carrots, dried cranberries, and some chopped goat’s milk gouda (aka BEST CHEESE EVER). Props to Kira for always making super tasty salads! [Salatenmeisterinen?!] Mmmmmm. There’s a recipe to warm up with. See? I told you it was super simple. Eat. Gloat because you’re getting omgea-3s for cheap! Quote movie. Be happy :]

2 Replies to “Long ago, somewhere deep in the jungle…”