My little baby bloglet is TWO years old this week!! (I say this week as I’m really not sure what day I started, and wordpress isn’t telling and I’m far too lazy to look back at my posts, whoops).

I feel like a proud parent! It’s so cute. To celebrate, I made… pie!!! (of course). I love my bloglet. Pie equals love. Therefore (QED?!), because I love my bloglet, I have made it a pie! And then I get to eat said pie, so everybody wins. Mmm, warm pie. Happy birthday, little two year old bloglet! Thank you for giving me an excuse to make pie (right. As if I ever needed an excuse to do that), even if it was a thousand degrees the day I made it and my dough got all sticky. Note to self: hot weather = sticky things = use mo’ flour! Whatever, got the crust in the dish in one piece so sticky is clearly sooo not a big deal.

There has been such a massive amount of change over the two years I’ve been writing this, I’m so thankful I’ve had this as a creative outlet. It’s hard to believe it’s been two years since I started! 142 posts, lots of snark, and some epic fails later, I can look back with quite a bit of pride! Lots of growth to be had if you check out the early pictures (actually, do me a favor and let’s ignore those, shall we?) versus the later ones. Lots more invisible internet friends! You know I love you. Some things haven’t changed though: I’m still as irreverent and awesome as I’ve ever been (wait. Probably even more than I was…you can be the judge of that ;) and the food is still delicious. I think. Most of the time!

For now, here’s a list (because I love them) of things I’m loving right now:

2) Monarch of the Glen. Ob.SESSED.

3) Whole wheat english muffins. Like that’s ever going to change…

5) LENTILS! Enough said. I eat them for breakfast (I heard that and saw that eyeroll. Let’s not be judgy, you wouldn’t love me unless I did weird things like that, riiiight?!)

6) Reading several books at once. I think my current total is 4. And yes, I will finish them all ;)

7) Raw honey and cinnamon on toast. How have I not discovered this before now?

8) Single crusted pies. That way, you get smacked in the tastebuds by summer’s gloriousness!

Anyway. Random things that were on my mind, and now they’re on yours. Muahha! Next thing you know you’ll be eating lentils for breakfast…

Makes one 8″ pie. The crust is the same one I’ve used before, coconut oil-whole wheat. It’s delicious and easily the fastest and least irritating pie crust I’ve ever made. Even when it’s ridiculously hot in your kitchen, it still cooperates with only minimal fussing. Oh yeah, and it’s absolutely delicious as well!

*I used the amount of fruit that would fill my pie dish—the pie was 8″ single crusted, and I didn’t want the filling to sink too much so I threw in an added bag of berries. In my relatively shallow pie pan it was perfect!

Prepare pie crust of choice and preheat oven to 425.

In a large-ish bowl, toss together peaches, marionberries, flour, tapioca, cinnamon, and honey. I usually thaw my berries/fruit slightly, since honey tends to be difficult when it hits frozen things—it mixes a bit better when the fruit is slightly thawed. Once everything is combined, pour filling into the prepared pie crust, and bake for 15 minutes. Lower the oven temp to 350, and bake for about another 45 minutes, until the juices are bubbling and the crust is lightly browned. Remove from the oven and let cool a bit (but serve warm!). 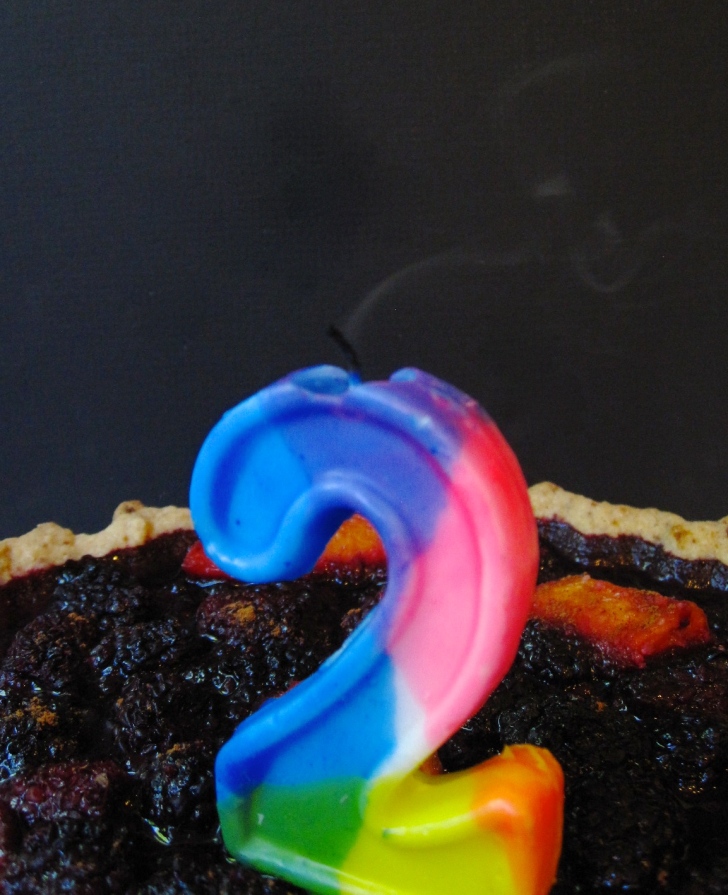